Please note that this site contains archival information. Adobe no longer supports the Edge Animate program. In addition, Apple has modified the way animations perform in the Books app which results in stuttering and other undesirable playback function using these techniques.

After a steep learning curve, I was able to create an animated picture book, "Balloon ABC" available at the iBookstore. Each page in the book contains a full page animation that plays when the page is tapped. It plays correctly on different versions of the iPad. It can also be viewed on the iPhone and on Apple computers with a few minor hiccups. No coding was required to create the book.

It occurred to me that like-minded book creators might benefit from what I have learned. Here's the basic workflow:


Characters and scenes were fleshed out using pencil and paper. Art elements were then built in Adobe Illustrator, sound effects were processed in Adobe Audition and animations were created with Adobe Flash. The animations were output from Flash using "export movie" as a sequence of png's and the sound track saved using "export video" through Adobe Media Encoder to create an mp3 sound file which was then converted to an m4a file using Adobe Audition. The png sequence and m4a audio for each page were compiled in Adobe Edge Animate and published as an ibook compatible widget. Each widget contains all the art, animation and sound that will appear on a given page. 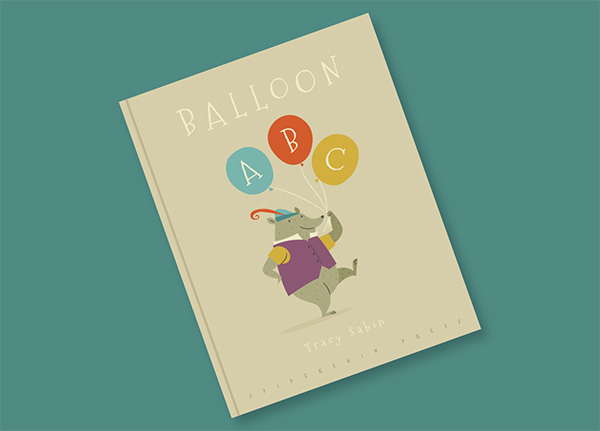 The book was assembled using iBooks Author. One widget was placed on each page. Then the widgets were coaxed into position and the book was previewed in iBooks on an iPad. Once everything was working correctly, the book was submitted to the iBookstore.

Even though "Balloon ABC" was designed at the original, non-retina size, the graphics are acceptably sharp on a retina iPad and the file size is reasonable.

Performance on iPhones and Macs

The latest iOS allows enhanced iBooks to be viewed on the iPhone. Unfortunately, at this moment, the "plays on page" interaction does not work properly and defaults to playing full screen. When you view the book on an iPhone the animation needs to be closed out on each page before you can move to the next page or access the table of contents. Hopefully this will be fixed soon.

On the Mac, everything works fine. Navigation is not very satisfying, though. Clicking through the pages by clicking on a navigation arrow with a mouse is just not as enjoyable as swiping the page with your finger. There's also a reduced sense of intimacy with the book, viewing it in a small window on a monitor screen.


Options outside the Apple ecosystem

You may wonder if a book like this could have a wider audience outside the Apple ecosystem. While iBooks Author can produce books that comply with the open epub3 standard, implementation of the standard is still a work in progress on non-Apple devices and apps. One can hope, however.

Tracy Sabin
Since 1973, Tracy Sabin has crafted illustration for a wide variety of clients. He has illustrated over 500 logos. His skills include animation, package design, paper engineering, font design and large scale imagery for public spaces. He has illustrated books for children, including the New York Times bestseller "Castle." His work has been featured in Graphis, Print Magazine, Communication Arts, the Society of Illustrators, and in books and articles about contemporary graphic design and illustration.